december 15 2017 was the last day we worked on the winter drill roads by plowing them out quickly with the td-6 known as the Kommunist Kat. over the xmas holidays we got lots of cold weather at -36c and when it did warm up it snowed lots. but during this time i worked away tossing money at out new purchase which is the 1953 Bombardier. this machine need lots of love and changes to make it part of the King of Obsolete Black Fleet. now it is time to check out the winter drill roads with a test run of the newly completed bombardier known as the Beast.

of course this bombardier has no brakes and 3 on the tree shift pattern for the transmission so it is great fun loading and unloading.

xena with her fancy camera got a nice short video showing that the Beast does not steer very well.

the first working job for the Beast was going very well considering it had spent a month in the shop.

but then again we found the limitation of a machine built to run fast a across a frozen lake that does not have 4 feet of hard packed snow.

the smooth body of the machine lets the track hang down which is called high centred. oh well.

there was no sense in shoveling the snow out from underneath the Beast when we were going to plow the road the next day. we went back to the Kingdom and got the td-6 known as Aggie. he is called Aggie because he was an ag cat in the south before coming north for reitrement. as you can see how much snow we have to plow to find the Beast.

the only bad part of this whole adventure is the fact the ground is not frozen other then where our winter road is. we are very limited where we can got with the cat and plowing the snow. a little pull and the bombardier is free and on solid ground.

but before we went and got the cat, i drove the KoO-Tracks truck around to the other side of the bombardier thinking we could pull the Beast out.

that plan did not work either and we had the truck high centred too. that is when we walked out to get the cat. the shovel in the picture didn't come with instruction on how to operate so it was not used at all.

the truck is sitting nicely on top of 4 feet of hard packed snow. that is why we went and got the cat. work smarter not harder.

it took a while to get all the snow moved and the road plowed open enough to get the equipment going. 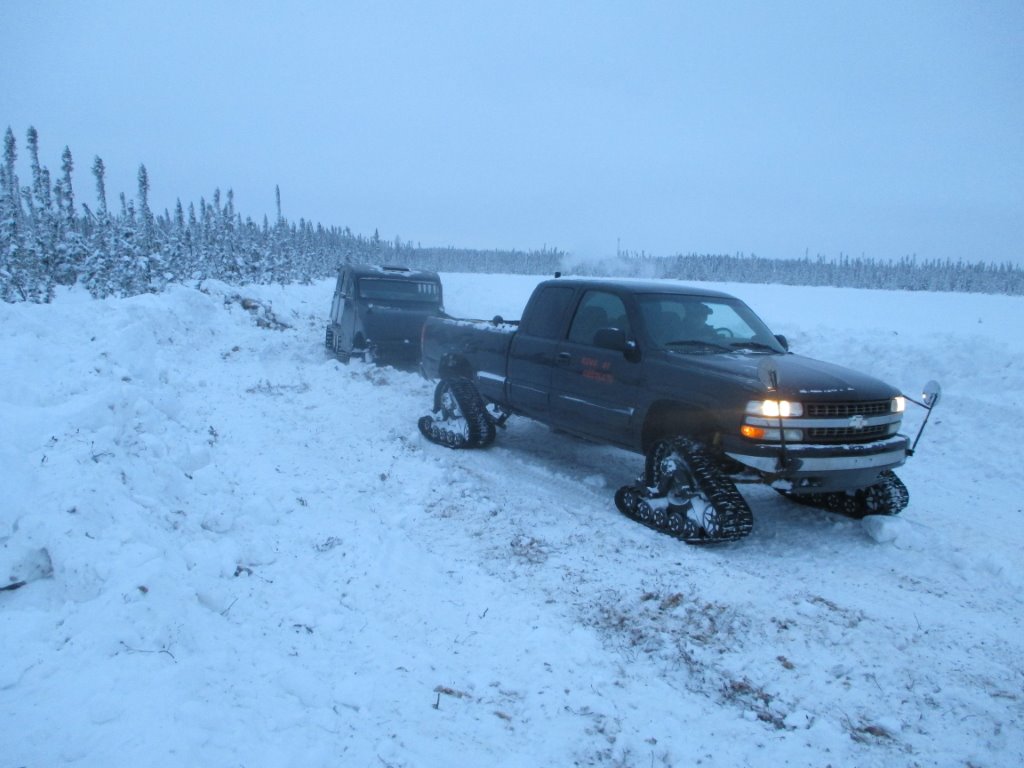 since the ground did not freeze up very well in the month since we plowed it. i had to use Aggie to cut the snow right down so it will freeze up to make a good road.

but some places are still not forzen and the little cat broke through numerous times. that is why we only use little cats instead of bigger ones.

as we plowed along opening up the winter drill roads in rough form, xena moves the equipment along as safety as i run the cat plowing.

the view from the windshield of the Beast.

we work late in to the darkness to get the winter drill roads rough plowed so the snow will turn from a sugar to a solid by the next day.